6 years, a marriage, a house, and a baby later, I’m a far cry from who I was at 20 years old. I reminisce about the days when my biggest concerns were who’s house the party was at that weekend, and what I was going to wear. Bonfires and late nights under the stars are a distant memory. It’s Saturday night, and my plans are to do the dishes, and hopefully get some sleep before my (almost) 10 month old wakes up for his first nightly feed. If I’m lucky I’ll have time to watch an episode of Shark Tank before bed.

Writing that paragraph did get me down for a second, I’m not going to lie. I do miss the freedom, and spontaneity of my former life at times. I remember one night, a couple of friends, and I, decided to drive an hour and a half to the beach for no reason at all. We spent the night talking and laughing in the cold sand, and then watched the sun come up before returning home. We didn’t need a reason ‘why’, because the reason was ‘why not?’.

In life and relationships, you’re either growing together or growing apart, but you’re always growing. Seasons emerge where you’re busy, where you’re depressed, where you’re suddenly less available than before either emotionally, physically, or both. For me, pregnancy, childbirth, and the months that followed, have been one of those seasons. I used to be the girl who was along for the ride, up for just about anything. My friends could count on me to show up when they needed.

I wouldn’t say I was a total door mat, but most of the time since I had no good reason to say no, I usually said yes. That all changed for me once I got pregnant. I found I had limits that didn’t exist before. I was tired, obviously. If someone wanted to see a movie after 8pm, forget it. I had to listen to my body if something didn’t feel right. I made decisions like, not lifting anything over a certain weight, cutting out caffeine, and choosing not to go out if people were drinking. To me these seemed, like perfectly reasonable, and even responsible, decisions. But I found myself in many situations where I was made to feel like I was disappointing the people around me, or inconveniencing them in some way.

This only escalated after I had my son. The first few weeks postpartum, I think everyone understands why you’re preoccupied. But what about month 4? Month 6? Month 10? Shouldn’t you be back to yourself by now? Well, my answer to that is, this is me now. I will never get to make another decision without first thinking about what is in my family’s best interest. For us, right now, that looks like, me being home more, working less, making sure I’m rested, eating out less, going out less, and so on… Unfortunately, for the people around me it means saying no, a lot.

My schedule is ruled by nap times, diaper changes, and teething. If we don’t get enough sleep the night before, I might cancel plans. If his nap goes long, I’ll be late. If breastfeeding or pumping makes you uncomfortable, I’ll see you in a few months. There is simply no room for anyone who doesn’t understand what my life looks like right now, and why. That sounds harsh, but the reality is that my world has changed drastically in the last year, and therefore, so have I.

There is of course a positive side to this. I absolutely adore being a momma to my boy. It’s hard, no doubt about that. But have you ever had your heart melted into your guts? Love like this did not exist in my life before him. I may not be able to drive to the beach at the drop of a hat, but a day spent cuddling the tiny human that I MADE, can’t be beat. It’s true that your friends change with the seasons. And though some relationships have fallen by the way side, I have been able to form new ones. Being a momma, you can have this unique bond with other momma’s who understand where you’re coming from, and have been through it too.

I won’t lie and say that, at times, I don’t miss the simplicity of life before marriage and babies took over, but one day I’m going to miss this too. So when I look back, I want to know that I made decisions that allowed me to be the best version of myself for my family, and know that I truly savored the moments that make this season so special. I won’t remember the nights out that I missed, but I’ll forever remember the look in my baby’s heavy, sweet little eyes, as I rock him to sleep tonight. 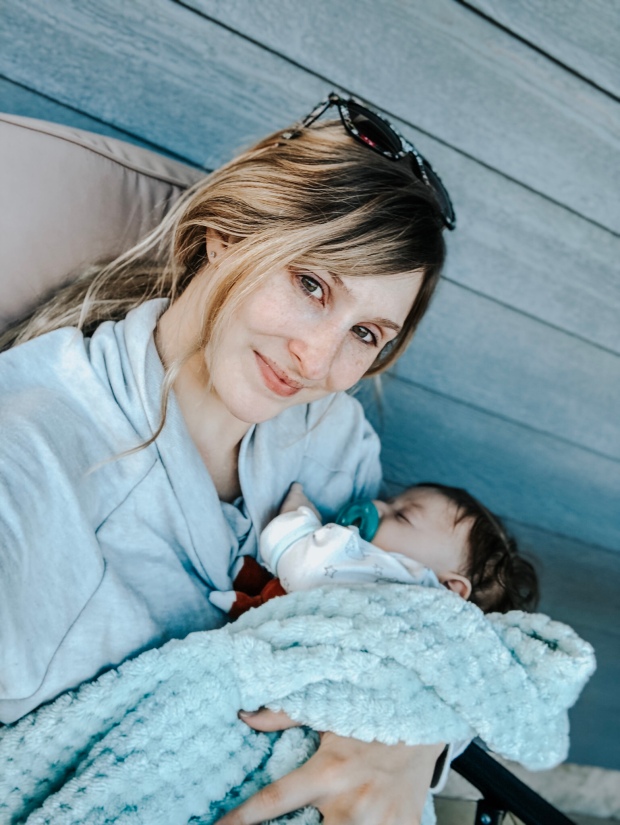